The main product that we work with internally ourselves and that is also used by several of our external customers is our container management system.

We can proudly say that more than 12 million citizens in Belgium and abroad (the Netherlands, France, Portugal, Slovenia, Poland, …) are managed through our container management system.

Based on our experience of many years, we've developed state-of-the-art software that is specifically geared to managing your container depot. CI-Web is a web-based application allowing for a great deal of interaction between municipality, citizens, waste collector and other users. The extent of the interaction depends on the rights assigned to the different players.

The assets of our container management system are:

You can search by:

The basic software can be extended with several modules:

Click on the module in question to obtain more information about it.

You would like to watch a demonstration? Please don't hesitate to contact us. Here you can see some movies about our software. 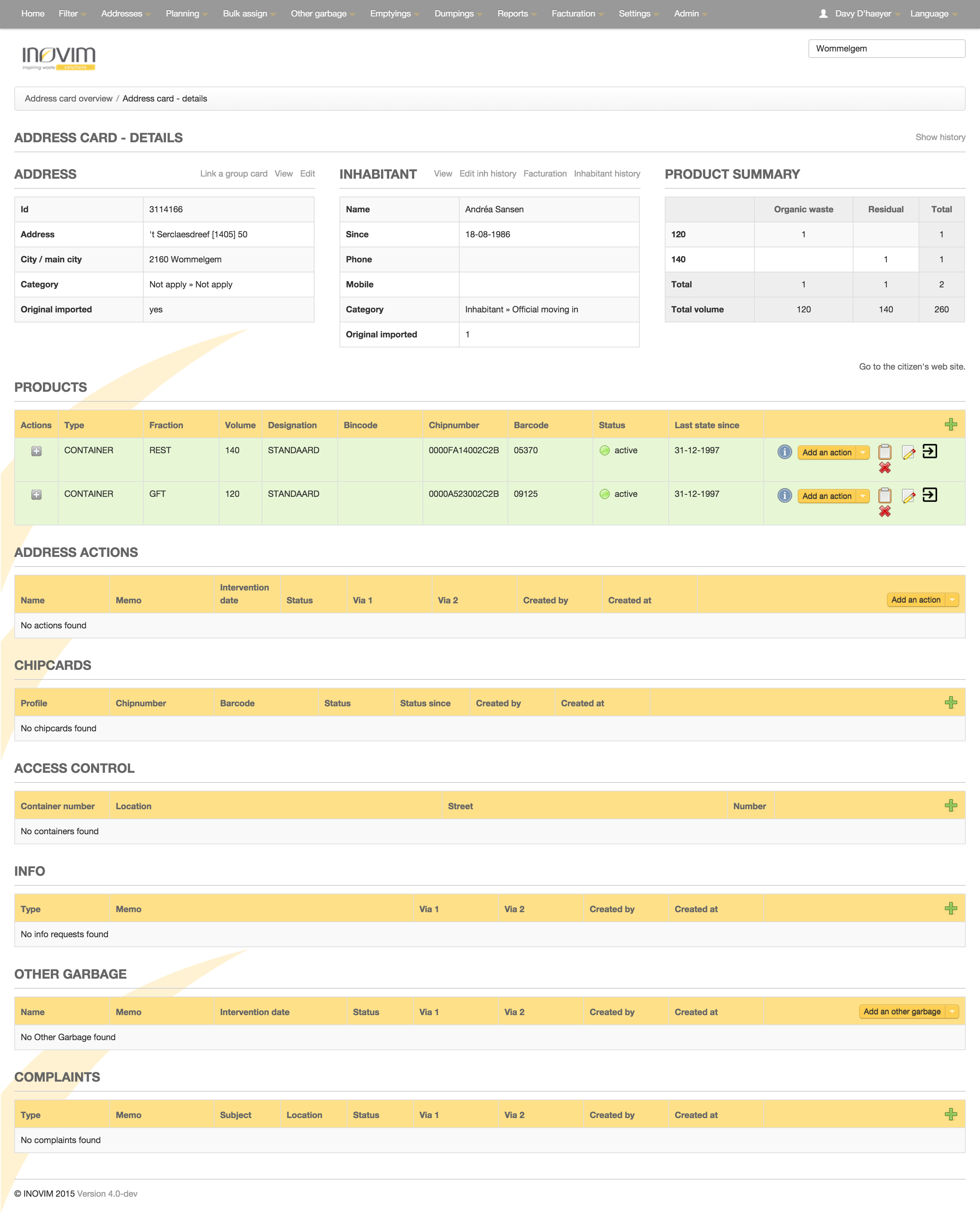 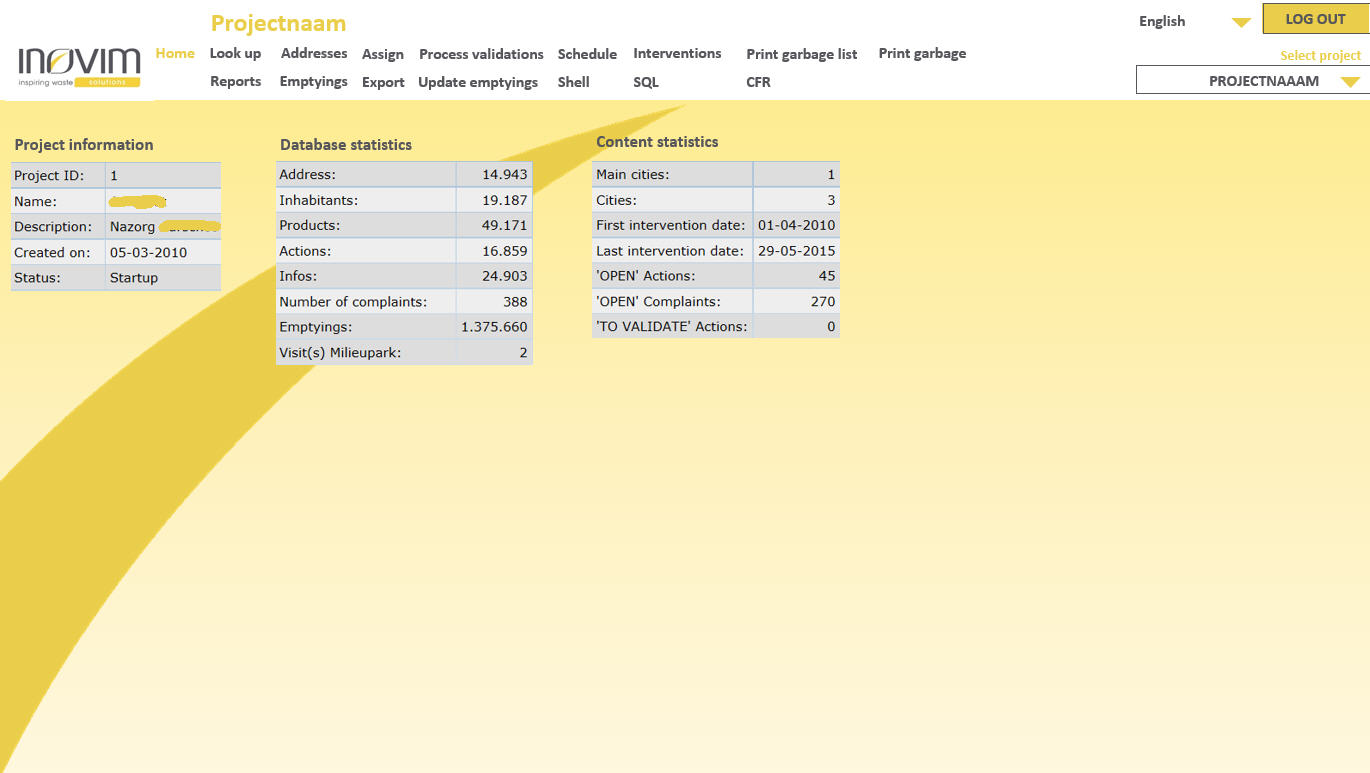 Next to the management of two-wheel bins and/or four-wheel containers, you can – through this module – also fluently manage your collective containers.

Through the dashboard, you will see with a single glance

With this module, you can 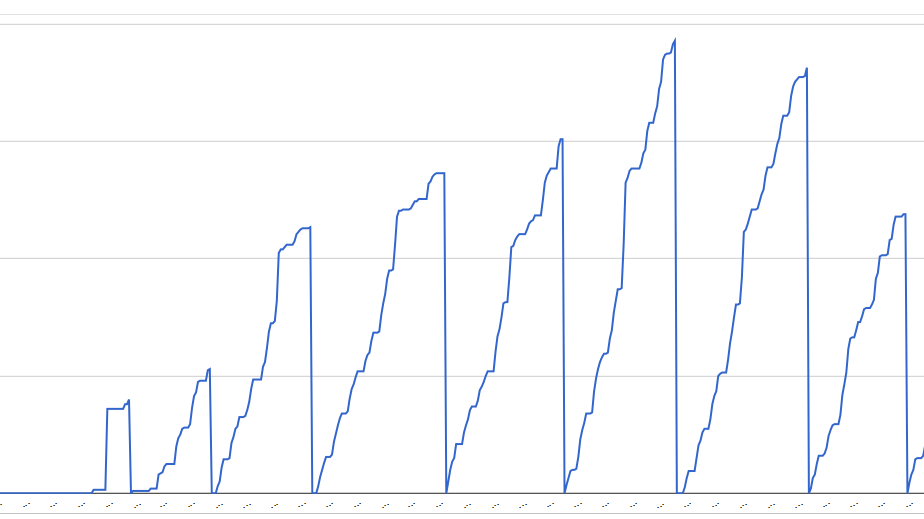 Using the invoicing module, you can as of now 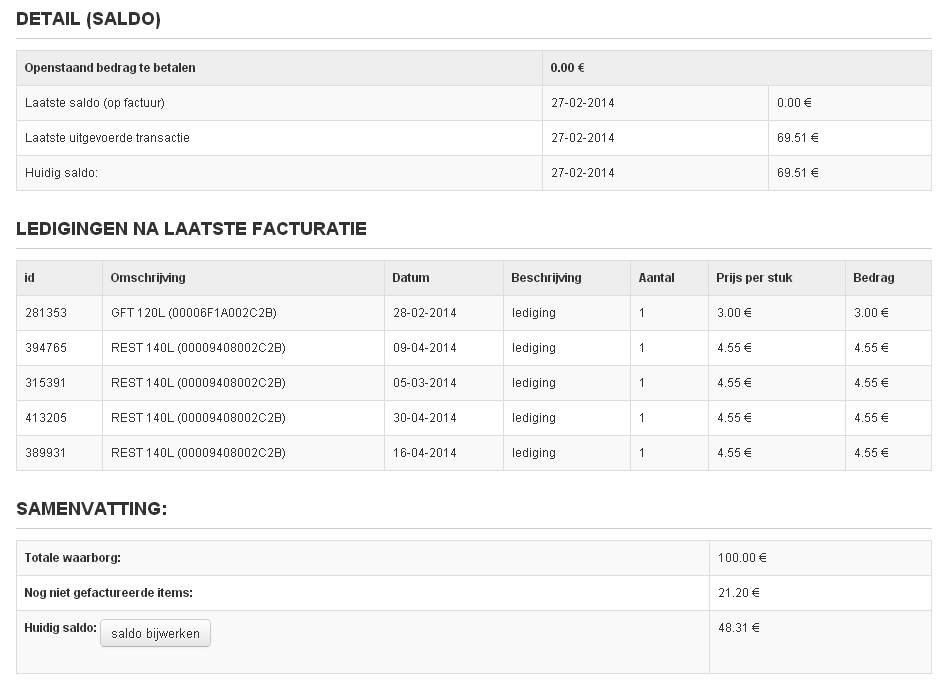 Next to the possibility to consult data, you can also export many different reports as MS Excel files so that you can use these data in presentations or are able to analyse them in greater detail.

Lots of standard reports and export tools are available, including the option to select a period to which the report should apply. All reports can be retrieved by qualified profiles on a 24/7 basis. You cannot only consult these data but also export them to MS Excel.

We offer reports in the form of a QlikView report. QlikView is a modern Business Intelligence (BI) tool for data analysis, dashboards and reports. This tool enables you to retrieve reports online and in real time. Once you've logged in, a couple of clicks (or "Qliks") suffice to consult standard information but also to arrive at other insights at a glance.

Upon the customer's request, we can, next to the information that has been registered in our container management system, also create a link with other data systems (e.g. your bookkeeping, ERP, hour registration tool...) to enable state-of-the-art reports and dashboards that are geared to the customer's specific needs and wishes. With this powerful, intuitive programme, you will – very rapidly and in a flexible way – gain insight in the key performance indicators (KPIs) defined by you, enabling you to respond adequately. Please don't hesitate to contact us free of commitment if you wish more information about this.

Below, you'll find a couple of examples of standard reports. It goes without saying that the content of these reports will be adjusted to your specific situation.

To standardise the many different types of chips, frequencies, scanning methods and coding, a number of international standards have been developed over the past few years. To make things more clear, we will now provide you with a short description about transponders, etc.

The chip used in the waste logistics system is actually a transponder. The word transponder is a contraction of:

The word 'transponder' is a collection noun for all information carriers that have an antenna and a memory that can be written upon or read contactless.

Transponders consist of  microelectronic components, the transmission and receiving antenna and an energy storage and data storage medium.

The chips used in the waste logistics system are so-called passive transponders. This means that the transponder does not have an energy source of its own (e.g. in the form of a battery). The chip receives its energy from electromagnetic radiation coming from a reading unit.

Chips are available in many different construction models. For the waste industry, the most frequently used models are as follows:

For the waste industry, there are three types of chips:

A similar positive verification can be performed on the fraction code. If the identification system is suited for it, the system can be conceived such that, for instance, only VFG-containers can and may be emptied. Containers with a chip with other information are not emptied.

As already written in the beginning, a number of international standards and guidelines have been drawn up.

The ISO 11784 and 11785 standards describe the identification by way of radio frequencies (RFID). As described above, it is necessary that the information (data stream) given by the transponder can be interpreted by the receiver. Usually, this data stream is composed of so-called data bits describing the identification code and the number of bits that is being sent.

EN 14803 is a standard that has been drawn up specifically for the waste industry; it concerns an addition to the ISO 11784 standard. It describes the general requirements and the verification methods for the identification of waste containers.  The EN 14803 standard describes among others which frequency ranges may be used:

In the Netherlands, chips for the waste industry must meet the STOSAG standard (Stichting Open Standaarden Afval and Grondstoffen - Foundation establishing Open Standards for Waste and Raw Materials). Obviously, we deliver chips that meet this standard. 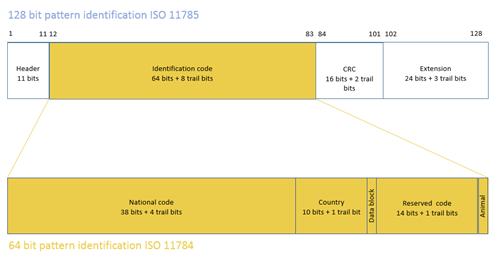 In the above figure, the data structure has been described according to ISO 11784. This description can be regarded as the standard for the waste industry; as such, the chip can be read by all identification systems of the major suppliers. It more in particular concerns a 64-bit identification code. The following table explains how chips are deployed within the waste industry.

Herewith, the programming method and the structure of the identification code are established for the different types of chips. However, as described before, with OTP and RW chips it is possible to programme information into the chip. The way in which this must be done and its structure have not been defined. Here, suppliers can save information in the way they wish. As for the purchaser, it is possible that a next supplier can read the identification code but not the specifically programmed part. That is why we prefer to use the Read-Only variant to ensure complete independence from whatever supplier. 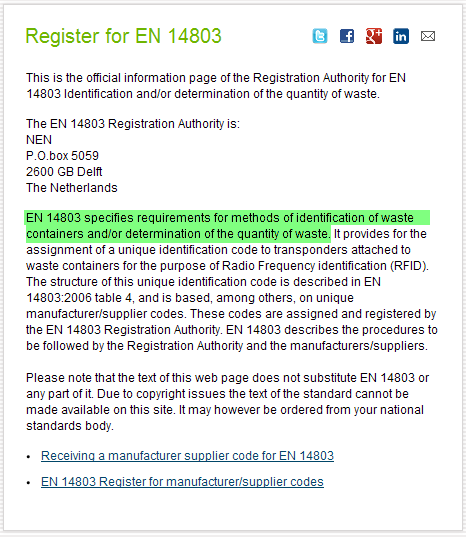 Next to chips for waste containers, INOVIM can also support you with the delivery of all kinds of chip cards and badges with which citizens can identify themselves at access control systems for underground or above-ground collective containers, waste collection centres...

The badges can be supplied in a wide range of different chip technologies and or frequencies:

Other chip variants and construction models are possible as well:

At request, these badge can be imprinted fully according to your wishes, e.g. in full colour, with your logo or another image, with a bar code and/or a unique number...

We deliver an access control system created on the basis of

The electronic system that we offer has very few loose parts, which makes it very easy to integrate and maintain it. Combined with the unit's austere design, the many functionalities and the simple lock, this access control system is a fine piece of high-quality engineering.

INOVIM supplies a system with the access software being geared to the control electronics as is used on the containers.

INOVIM offers its Bin Identification System – BIS - for the collection of data of waste bins which were emptied by garbage-trucks. The base for this development were issues like service, easy to use and investment costs.

The complete system is mounted on the lifter. The system consists of  a control-unit, antennas and readers. The mounting is simple and easy.

The use of the system is as easy as that: immediately after starting the truck BIS is operational. Driver or loaders do not have to activate the system. The system registers emptied containers and blocks the emptying of containers which are on the blacklist. By using LEDS the status of the emptying is displayed.

The details of the emptying are transferred to a server by GPRS. With the registered GPS-coordinates the tour can be visualized.

BIS has also the possibility to connect to on-board computers. This is realized by using a simple protocol for transferring emptying data to and whitelist or blacklist information from the on-board computer.

At simple request, you can turn to INOVIM for purchasing

Please don't hesitate to contact us if you want more information about this.

By now, many municipalities have introduced a DIFTAR system or some other form of "the polluter-pays" system, whereby waste is being offered through a combination of minicontainers and underground waste containers.

However, there are lots of situations in which minicontainers cannot be used but where there is no space either for one or more underground containers.

Also in such situations the municipality should and wants to charge the citizens in question in a similar way. For such cases, we've developed two specific products, i.e.

Also in apartment buildings with only a limited number of residents, our systems can offer a practical solution.

Mobile Waste Containers with identification or MAC-i systems are the solution for buildings for which ordinary minicontainers or underground containers are not practical: 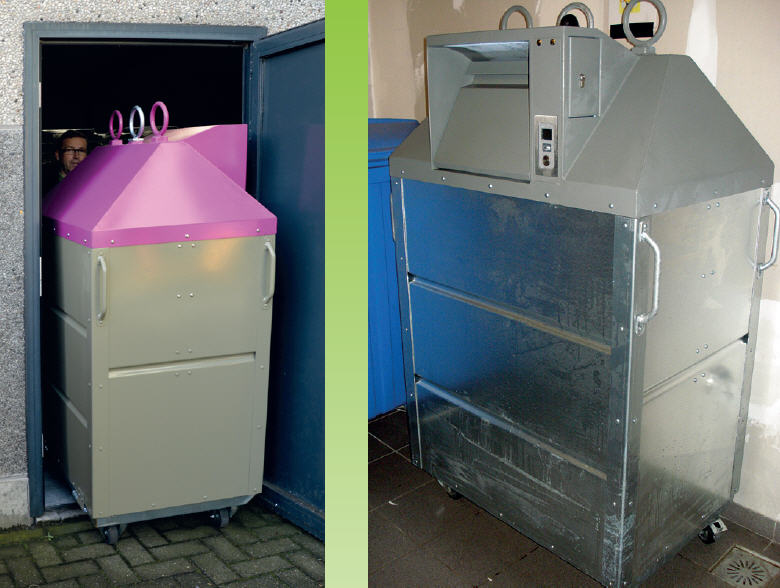 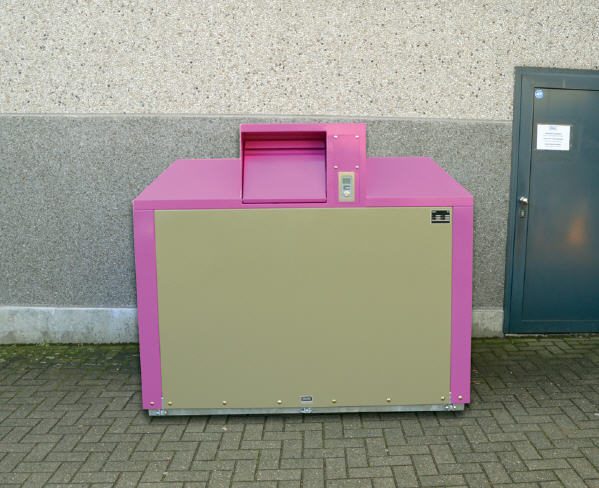 The frame is completely thermogalvanised according to EN ISO 1461 and consists of:

The side walls are made of 1.5mm thick steel, completely thermogalvanised (sendzimir galvanised).

The drop flap has a content of 30 litre and the drop hole measures 366 x 250 mm. As the drop flap opens to the inside, no water can penetrate into the container compartment. Because of the special lock construction with several locking instances, the waste can but fall through when the flap cannot be opened anymore.

The whole container is excellently protected against adverse weather conditions.

An important additional benefit is that both the flap construction and the identification system of the BAC-i are fully exchangeable with those of the MAC-i. This makes their maintenance much easier.

As for the MAC-i, the BAC-i is also available in any RAL colour.

They are painted using a two-part painting process. The two-part paint offers very good adhesion as well as strong resistance against the deforming of metal. After the layer of paint has been applied, an extra anti-graffiti coating is applied (optional). This ensures that graffiti can barely adhere and is easy to remove.

The whole container is excellently protected against adverse weather conditions.

BAC-i are fully exchangeable with those of the MAC-i. This makes their maintenance much easier. 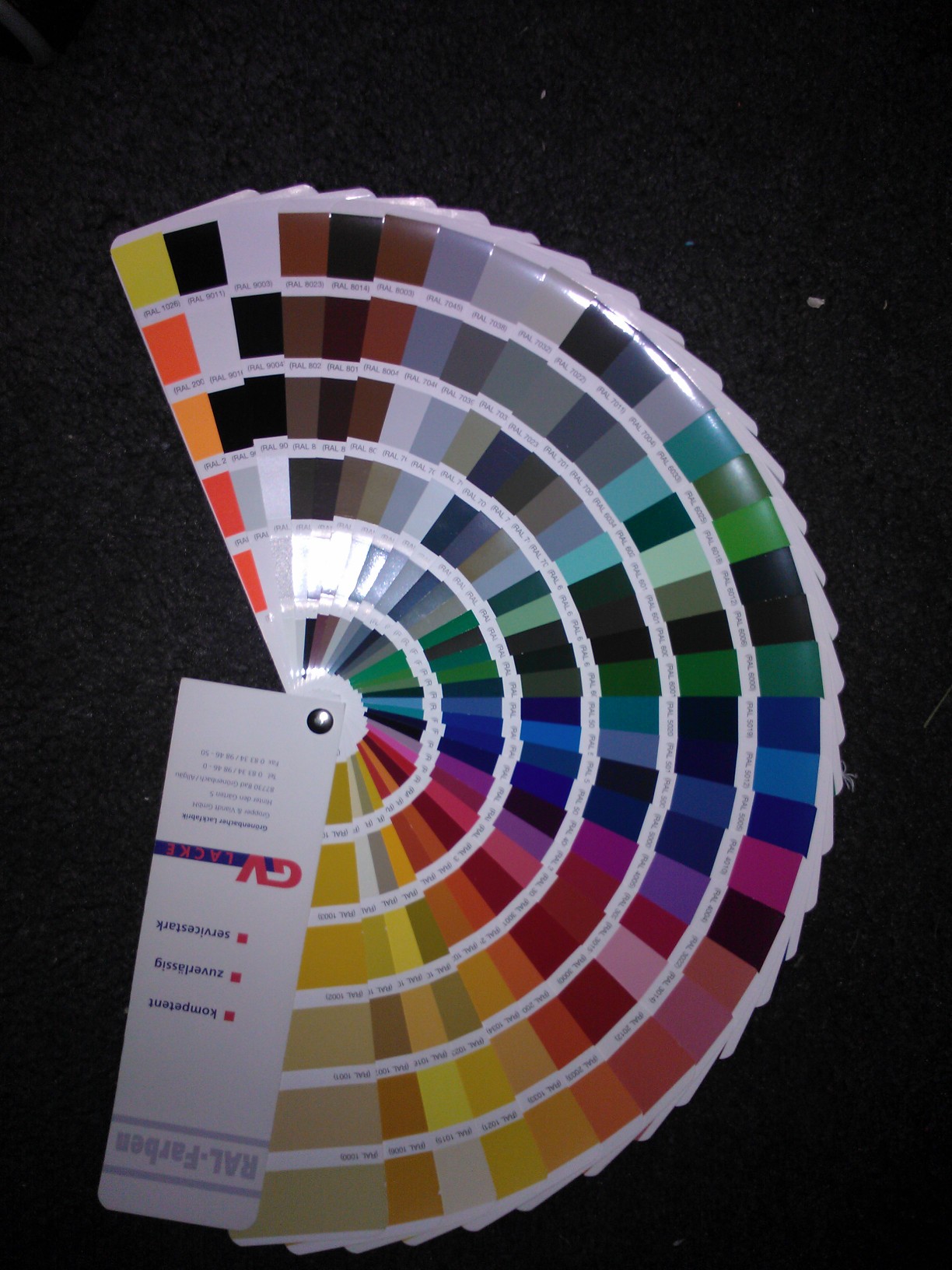